Economic Risks to Watch for in 2022

Ripsaw LLC is not an investment advisor or investment broker. Ripsaw LLC is a wealth management software company. This content is for informational purposes only, you should not construe any such information or other materials as legal, tax, investment, financial, or other advice of any kind. Dr. Stanley J. Kon’s views, opinions, and commentary are his own. 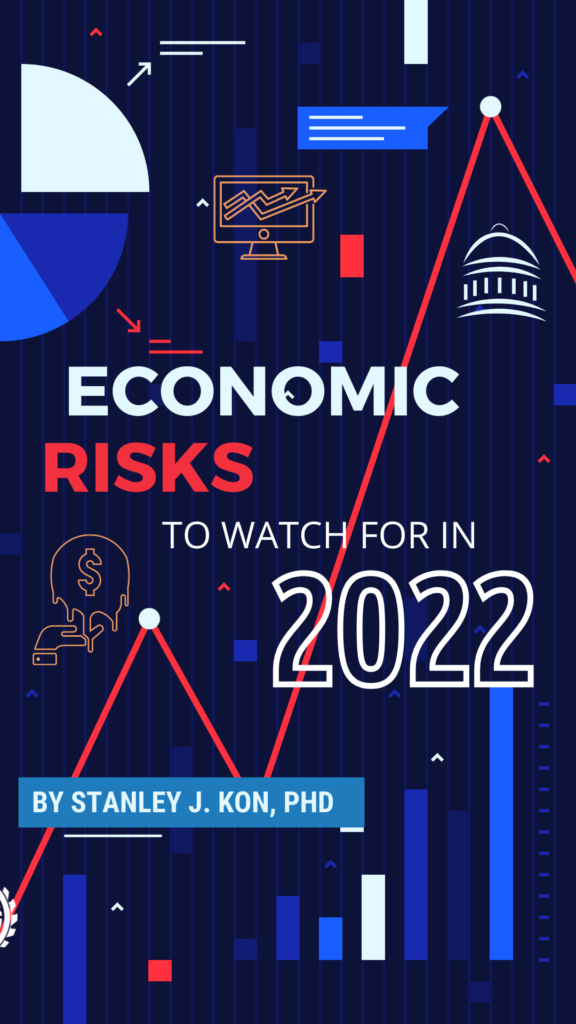 The current economic environment has risks that we have not seen in generations and some that have never been experienced. Macro events and policies are creating problems for the near and long term. An inflation cycle, managing COVID-19 and its variants, geopolitical events, climate, culture conflicts and the midterm elections are risks that need to be considered.

Traditionally, the Federal Reserve has maintained low short-term interest rates to stimulate the economy without influencing long-term interest rates. More recently, its use of quantitative easing, purchasing enormous amounts of Treasury and mortgage-backed securities, has kept long-term rates low as well. All maturity Treasuries now have unprecedented negative real (nominal minus expected inflation) rates of return to investors. It should not be a surprise that investors have dramatically bid up the price of stocks and real estate as an alternative. The Fed has effectively coerced investors into higher risk assets. That can only work for so long.

Inflation Is a Serious Risk

The primary reasons it has been under control since the 1980s are globalization and productivity. Globalization provided low-cost labor and the information technology age allowed us to produce more goods and services for the same or less inputs. The cause of inflation may be described as the result of too much money chasing too few goods. Federal Reserve policies have been pumping more money into the economy and the political class is simultaneously encouraging labor shortages and coercing reduced availability of goods and services with more regulations and quasi shutdowns. This double whammy is accelerating inflation. COVID-19 is the short-term excuse, but the policy effects are not going away anytime soon. Apparently, variants of COVID are not going away anytime soon either.

What ever happened to the notion of shared sacrifice? The federal debt ballooned to finance WWII. Then it was substantially paid down with high tax rates (up to 90%) that were later reduced once the federal debt was under control. Those of us that remember the great inflation (14.5% in 1980) can recall the sacrifices of a great recession in 1981-82 (11% unemployment) that was necessary to defeat inflation. In the late 1990s, the economy was doing so well, and government spending was in check such that the fear was U.S. government debt would be eliminated soon. In 2000, we were worried about needing to find a benchmark replacement for U.S. Treasury bills, bonds and notes as riskless assets. In fact, the U.S. suspended issuing the 30-year Treasury bond in 2001 for lack of the government’s financing needs. Hard to believe.

COVID-19 – Who Will Pay For This Stagflation?

Instead of shared sacrifice, the new notion is that COVID-19 is no fault or our own so we should not have to sacrifice. Politicians continue to give away trillions of dollars without regard to value, waste, or fraud. In investment terms, the government borrows at positive rates and invests (spends) at negative rates. In many cases the return on investment is -100%. Our first responders and food suppliers sacrificed when there was no vaccine. Did any federal or state official initiate or even recommend cutting government employee salaries by 20% for staying home and not working while small businesses were closing around the country? People did not travel or go to the theater or go to restaurants, but a pay cut for not working was out of the question even though workers were spending less. No other natural or unnatural disaster has been treated with this lack of shared sacrifice.

Who will pay for this stagflation? It is likely to be the next several generations. COVID-19 was not their fault either, but they will pay all the cost in the form of higher taxes or inflation and a lower standard of living.

How Will It All Unfold?

At some point, the government will have to offer a positive real rate (nominal rate minus the inflation rate) of interest to attract investors. To make the national debt less costly now, 85% of it has been issued with relatively short maturities (0 to 10 years) when obligations are much longer term. This maturity mismatch leaves taxpayers with enormous interest rate risk. That means as interest rates rise, these bills and notes will have to be refinanced at a higher cost as well as financing growing deficits. In other contexts, like pension obligations or bank interest rate risk management, this large a maturity mismatch would be considered negligent.

With the debt approaching 30 trillion dollars, each 1% increase in the level of interest rates will eventually cost the taxpayers 300 billion dollars per year of additional interest payments. Think about current inflation and a 5% increase in rates eventually costing an additional 1.5 trillion dollars per year in interest payments. Get really scared at the over 15% Treasury rates we had in 1982. Note that the federal government only collects around 4 trillion dollars in total taxes. This may be mitigated if there is a Federal Reserve rate increase or income taxes are significantly increased or government cuts spending or some combination of all these. So far there is no attempt to mitigate. When will government debt capacity be reached, or government debt rating downgrades cause even higher rate increases. Either way, discipline will come to the market, and it will hurt.

Total inflation can be divided into expected inflation and unexpected inflation. Investors typically require, and prices typically reflect, a demand for an expected rate of return above inflation to invest rather than spend. Short maturity Treasury bills typically provide a hedge against changes in expected inflation. That is, as rates increase, you can roll over a T-bill every 3 months for the higher rate. A money market fund provides a similar strategy. Long-term bonds will lock you in a low rate. As rates go up from increases in expected inflation, bond prices will decline. They are a good hedge against deflation associated with rate declines, but not inflation.  I keep saying typically, because the Federal Reserve has been penalizing this short-term T-bill strategy, especially for a prolonged period since 2010 (see Figure 1) but is expected to change course in 2022 with fed funds rate increases and reducing their quantitative easing campaign. Will the Fed have the fortitude to do enough if the economy is not growing sufficiently? Or will they be behind again? 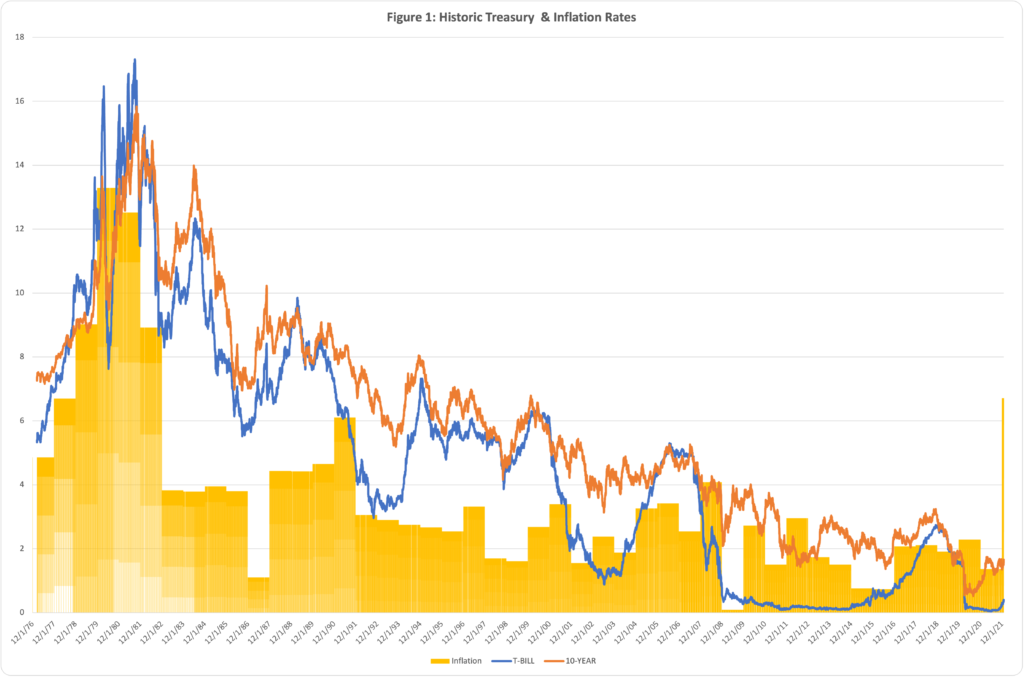 One strategy to hedge against total inflation is to find investments that are highly correlated with a change in the consumer price index. Treasury Inflation-Protected Securities (TIPS) are an example of an investment whose payments are linked to CPI outcomes. In Figure 2, we see that current prices for TIPS imply a negative yield (real rate = nominal rate minus expected inflation rate). TIPS investors are currently bidding up the price and yield down as insurance for CPI inflation. They are probably paying too much as negative yields indicate. Buying TIPS when real rate yields are positive is a low-cost hedge against an unforeseen bad inflation outcome. Now that a high level of inflation is foreseen by the market, it is a high cost and less effective hedge. 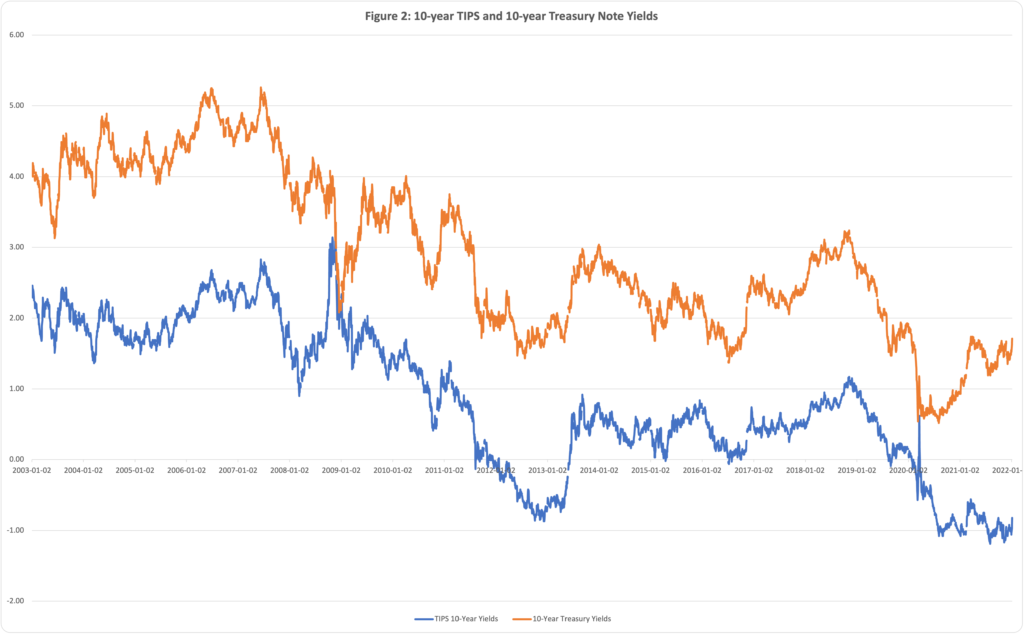 There Are Several Problems Investing Just Based On CPI Correlation

First, by viewing it in isolation it uses up valuable capital. This may result in a significant opportunity cost associated with having less allocation to higher expected return assets. More importantly, the CPI is an artificial benchmark, not your personal consumption bundle. You should want to hedge against price increases in your unique consumption bundle by locking in those costs.  If that includes home ownership, hedging against future home price increases is to buy a home as soon as possible.  In the future, if you need to move far away for a job opportunity, it is likely that your home price appreciation will offset the increase in the price of your next home.

Once you own a home, a hedge against an increase in energy cost is to invest in solar panels for your home electricity and to fuel an electric car as a hedge against gas price increases. The better hedge against your personal inflation risk is to invest directly in stabilizing the cost of your consumption bundle. Other assets that you might think are somewhat correlated with inflation will be considerably less effective and pose additional risk dimensions.

Regarding an equity allocation, VIX is often called the fear index. In Figure 3, we see that its currently value of 16.92 is below its long run average of 19.48. Less risk, less expected return compensation required by the market. In the coming months, if inflation accelerates by more than the current market expects or any of the other potential downside risks develop, VIX may increase dramatically, risk premiums demanded by investors will increase and stock prices will decline. The problem with an overextended government is that resolving negative events will be more difficult to implement as is evident with the current COVID outbreak. 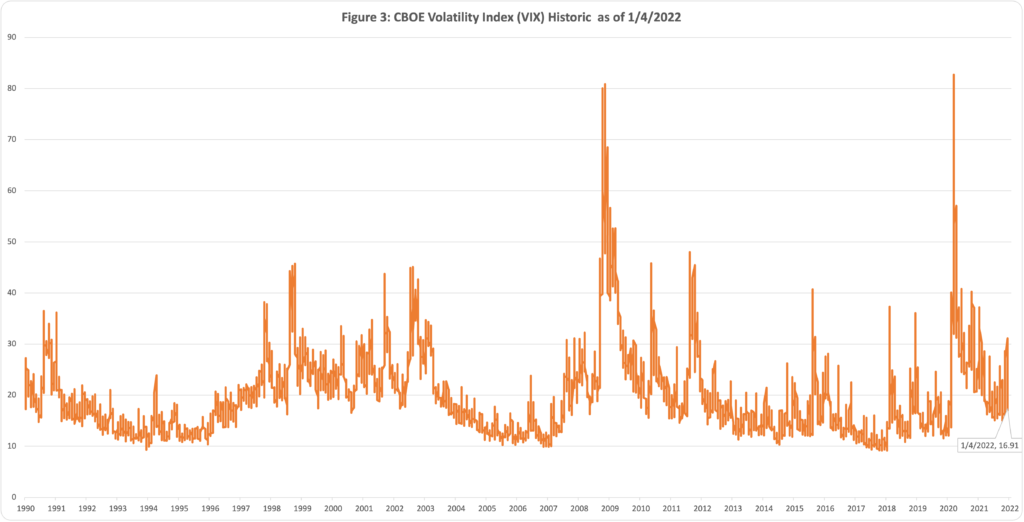 The future contains many downside risks with most asset class prices reflecting modest to low compensation.  As interest rates seem more likely to go up then down, notes and bonds are exposed to potential large losses. Given the low compensation in bond yields across the maturity spectrum, it may not be a good use of a risk budget to hold longer maturity notes and bonds. A barbell strategy with short-term investment grade fixed income securities and a well-diversified stock portfolio will have option value to avoid losses and reallocate to those assets with sufficient compensation as the inflation cycle and other downside risks evolve. Well-positioned long-term investors can benefit from what may be available in 2022.